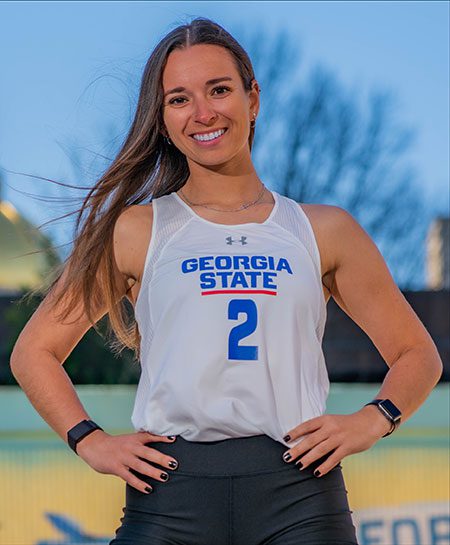 As an undergraduate scholar-athlete at Florida Gulf Coast University, Kayla Whetstone became the program’s all-time wins leader despite missing most of her junior season to COVID-19. The pandemic could have cut her athletic career short, but the NCAA gave athletes an extra year of eligibility. Whetstone already had earned her bachelor’s in economics and finance from Florida Gulf Coast and jumped at the opportunity to earn her master’s while continuing to play beach volleyball as a graduate transfer.

“Playing volleyball while earning my master’s in finance was a no-brainer,” Whetstone said.

Many schools invited Whetstone to join their programs, but she was most impressed with Robinson’s rankings and graduate placement rates.

Like many scholar-athletes, Whetstone had to balance competing at the highest level while remaining committed to her studies. After wrapping up class at 9:45 p.m., she woke up at 6 a.m. the next morning for workouts.

“We’d do site warmups, which are the practices before tournaments, and I’d still be sandy while giving a presentation for class,” she said.

In spring 2022, Whetstone led her beach volleyball team through its highest single-season winning percentage in school history. The Sandy Panthers took the Conference USA Beach Championship title, punched a ticket to the NCAA tournament, and ranked seventh in the nation.

“It was like living a dual life at that point,” Whetstone said. “I was riding high from finishing the best season of my career and making history for Georgia State athletics, but I also needed to stay grounded in my classwork.”

After graduating in May 2022, Whetstone was hired as a financial analyst in Wells Fargo’s small business banking unit. The hiring team valued her financial modeling and analysis skills, and was impressed by her outside-the-box approach to solving problems—an ability she honed while reviewing case studies in Harley E. “Chip” Ryan’s Corporate Finance class and while delivering presentations in Beatty D’Alessandro’s Leading the Finance Function class.

D’Alessandro was particularly instrumental in supporting Whetstone during her job search. He reminded her of the hard work she and her peer put into their projects. “He told me to be confident because I was good enough for any job, so apply for it,” she said. Whetstone was skeptical at first. Good thing she trusted her new skills and instincts to keep finding success.